In 1952, Francis Cammaerts became the headmaster of Alleyne’s Grammar School in Stevenage, Hertfordshire, a post he held for nine years. A committed pacifist, the pupils and teachers at Alleyne’s knew little of Cammaerts exploits in the Second World War, or his reasons for deciding to play an active part in the conflict. 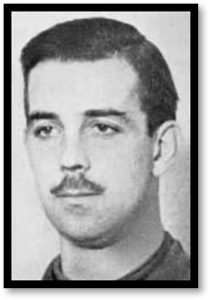 He was born on the 16 June 1916, in the London borough of Kensington, the second child of Émile Leon Cammaerts, a Belgian poet, and his wife Helen Tita Braun, a Shakespearean actress. The couple moved from Kensington to the Hertfordshire village of Radlett, where three more children were born, Catherine, Pieter and Jeanne.

Following a formal education at Mill Hill school, Cambridge University and, later, at St Catharine’s College, Francis took up a career as a Teacher and, after a short spell in Belfast, became a schoolmaster at Penge county school for boys. In 1939, whilst living in Beckenham, Kent, he volunteered as an ARP warden for the County Council, a part   that could be seen to support the war effort without taking a combative role. By 1940, he had been refused registration as a conscientious objector by his local tribunal, but it was granted by the appellate tribunal, conditional upon him taking up agricultural work. He joined a farm training project at Holton Cum-Beckering, Lincolnshire, and during this period met Nancy Findlay, whom he forever referred to as Nan. The couple married shortly after they met on 15th March 1941.

However, two weeks later, on the 30th March 1941, his younger brother, Pieter, was tragically killed while serving in the Royal Air Force. Pieter had enlisted in the RAF shortly after he outbreak of war, and said of his decision:

“I’m not the only one. There are many married men crowding the recruiting offices who understand still less than I do. Besides, I’m not choosing this job because it’s dangerous — between you and me and the bedpost, I’m scared stiff — but it’s the best means of avoiding the tedious waiting in muddy trenches. I could never stand that. The air is clean at least, and if the end comes it will be short and good.” 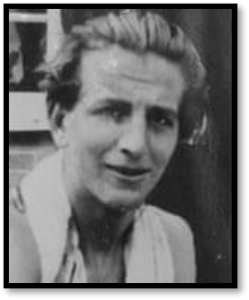 On completion of his training as an Observer, Pieter was posted from No.17 Operational Training Unit at RAF Upwood, Cambridgeshire, with his two crewmates, Sergeant Leslie Ernest Kiddle, a trained Pilot who had been in the service since 1937 and Air Gunner Sergeant Ronald Henry Kniveton, who, like Pieter, had only recently joined up. The three men were attached to No.101 Squadron, part of 2 Group, Bomber Command, arriving at RAF West Raynham, Norfolk, on Boxing Day 1940.

Pieter flew on his first operational mission on the 16 January 1941, when two of the Squadrons Bristol Blenheim aircraft were ordered to attack the docks at Boulogne. Owing to thick cloud the crew of the Bristol Blenheim (T2281) were unable to find their target and were forced to return home with their payload still aboard. A disappointing start to his active service role.

The appalling weather in the opening months of 1941 restricted flying operations and saw Pieter only take part in a further five operational flights. On the 23 March, he and his crew attacked the German city of Hanover, their payload causing “vivid green explosions”. A week later, on the 30 March their Bristol Blenheim (T2281) was tasked with an anti-shipping raid on Brest, France. As the aircraft returned it was forced to make a landing at RAF St Eval, Cornwall. The Pilot would have been unfamiliar with the airfield and as it came into land overshot the flare path and crashed onto the runway. Sergeant Pieter Cammaerts and the pilot, Sergeant Leslie Ernest Kiddle, were killed. The Air Gunner, Sergeant Ronald Henry Kniveton, was injured in the head and leg and admitted to Truro Hospital. Kniveton survived the war and returned to his Derbyshire home, where lived until his death on 5 July 2003.

It Does Not Matter What Happens To Us, But How We Behave Under The Ordeals That Are Given To Us. 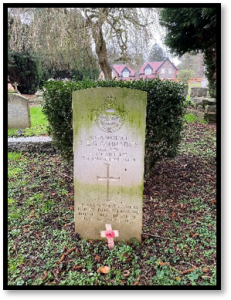 The grave of Pieter Cammaerts at Radlett cemetery. (Paul Johnson)

Following the death of his brother, Francis felt he could no longer stand aside, and, as a fluent French speaker, he succumbed to the urging of his friend, Harry Rée, to join the Special Operations Executive (SOE), a secret organisation whose purpose was to conduct espionage, sabotage and reconnaissance in occupied Europe, and to aid local resistance movements.

Francis began a period of extensive training in October 1942, but Training staff did not think highly of him. They reported that he would make a competent sabotage instructor, but did not appear to have the leadership qualities needed for the task that was to be assigned to him. However, on the completion of his training he was appointed the rank of Captain and the given the code name Roger.

Two years after the death of his brother, on the 23 March 1943, Francis Cammaerts was flown into occupied northern France having been assigned to the Donkeyman circuit, which was then operating in the upper Rhône Valley. On arrival, his reception party drove him first to Paris, with a dangerous disregard for security that alerted him to the risks of such behaviour. Being over six feet tall, he felt very conspicuous, so he left Paris by the evening train for Annecy to join Donkeyman. In Cannes he established a cover as a teacher recovering from jaundice. This was the only time that he spent more than four nights in the same place, as security rather than urgency was paramount at that stage of the war. 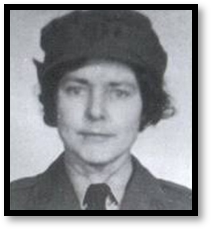 After discovering that Donkeyman had been penetrated by Hugo Bleicher of the Abwehr, the German military intelligence service, he moved to St Jorioz in the mountains of Savoy, and set up his own circuit code named Jockey. This comprised of seven or eight reliable individuals, one of whom was Cecily Lefort (Right), who Francis described as his “right arm”. After being thoroughly briefed about the importance of security, the SOE agents set about recruiting potential saboteurs for when the time was ripe. Cammaerts’ insisted that the key to individual security was that his agents always had a credible reason for being where they were, if stopped by a German patrol. However, Cecily Lefort was arrested by the Gestapo on 15 September 1943, possibly after being betrayed, and after considerable interrogation and maltreatment was sent to Ravensbruck concentration camp. She was transferred to Uckermark Camp in early 1945, and it was here that she was executed in the gas chamber.

Despite the devastating loss of Lefort, and the potential implications it brought for Jockey, by the end of 1943 Cammaerts had made sure his circuit was ready to play its part in any sabotage that might be required. Following the Normandy Landings, the Jockey circuit, in conjunction with other SOE circuits, cut railway lines and helped to severely hinder German troop and machinery movements. Francis Cammaerts was appointed head of Allied missions in south-eastern France, and had, by this time, built up an organisation consisting of more than 10,000 people.

In August 1944 the Allies invaded southern France (Operation Dragoon), and the Jockey circuit and other SOE teams again played their parts. They kept open the route from Cannes to Grenoble, allowing the Allied armies to get clear of the lower Rhône valley. It was at this point that, despite his meticulous care for security that Cammaerts, Xan Fielding and another colleague were arrested by the Gestapo in Digne. The Gestapo probably did not realise Cammaerts’ significance.

Krystyna Skarbek, a young Polish SOE operative who had avoided arrest, managed to get Cammaerts and the others released. She confronted two collaborators, Albert Schenck, a French liaison officer to the Gestapo and a Belgian interpreter, telling them that US troops would arrive within hours and that if they did not co-operate she would ensure the pair were handed over to an avenging mob of French citizens. The terrified collaborators succeeded in getting Cammaerts, Fielding and their colleague released.

Cammaerts’ time in occupied France, 15 months in total, now came to an end. He was promoted to Lieutenant-Colonel, awarded the Distinguished Service Order and the Legion d’honneur, Croix de Guerre and the American Medal of Freedom for his exploits in southern France. As in the case of others who operated in enemy-held territory for prolonged periods, he gave a great deal of credit to the ordinary French citizens who had provided him and his colleagues with safety and comfort.

Following his time at Alleyne’s Grammar School in Stevenage, he became the Principal of the Leicester Teacher Training college in Scraptoft, between 1961 and 1966. It was during this period that tragedy struck, when his daughter, Christine, died from the effects of Hydrocephalus. Francis then moved to Kenya to help with the development of the countries education system in the immediate post-colonial period. He became Professor of Education in Nairobi from 1966-72 and later returned to England, to become head of Rolle College, a teacher training college at Exmouth, Devon, which later became part of University of Plymouth. In 1981, aged 65, he came out of retirement to start a teacher training college in Botswana. He had a major impact on the development of education on all levels in the country, which had the most advanced policies on the African continent.

Francis Cammaerts finally retired in 1987, returning to live with his beloved wife in the south of France. Nancy passed away in 2001 and Francis remained alone until his death in on the 3 July 2006 at the age of 90.