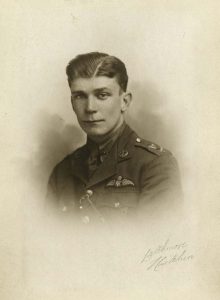 Cuthbert Foster was born on the 18th October 1898 and lived at 39 Walkern Road, Stevenage. After completing his education he began work as a Bank Clerk but by this time war had been declared,  and he was carried along with the wave of patriotism like so many young men of his generation. Shortly after his 18th birthday he volunteered for military service and joined the Army in February 1917 as a Private. At this point in the war the exploits of the men of the Royal Flying Corps, particularly the Fighter pilots, were the subject of intense media attention and the romance of this new form of warfare cast a spell upon many young men, including Cuthbert.

In November 1917 he was selected for a commission in the RFC and  soon began his pilot training. During his flying training he suffered two crashes, both of which he managed to survive which, with flying still in it's infancy, was something of an achievement in itself. Despite these setbacks Cuthbert eventually graduated as a pilot on the 27th February 1918 and after gaining his "wings" was swiftly posted to "C" Flight of No.88 Fighter Squadron, which had only recently been formed.

The men of the squadron departed for France aboard the HM Australind on the 16th April 1918, arriving at Le Harve the following day. Although they were quickly taken to their final destination, Berques-Capelle aerodrome, the squadron's aircraft did not arrive there until the 25th April with their first offensive operation being flown the next day. The Squadron moved to Drionville aerodrome on the 19th July for short period after, which they moved to Serny aerodrome, arriving there on the 2nd August 1918.

Local newspaper reports state that during his time at the front Cuthbert was credited with shooting down six enemy aircraft and was responsible for damaging a great many more. Although squadron records indicate that he flew many types of aircraft including the DH6, Sopwith Pup and BE12, as well as the Bristol Fighter there is only one entry in the 1918 log which credits Cuthbert with the destruction of an enemy aircraft. This was on the 4th September when he, and his Observer Lieutenant B H Smyth, were in combat with a Fokker biplane over Seclin. The enemy aircraft was seen to dive to the ground out of control to, it must be assumed, it's destruction.

On the 27th September 1918 Cuthbert climbed aboard his Bristol F2b fighter, E2153, along with his observer, Sergeant Thomas Proctor (212137) a 31 year-old from Belfast. Along with four other aircraft they were to perform an escort role for aircraft of No.103 Squadron who were on a bombing mission. During the flight they were attacked by a number of enemy aircraft and Cuthbert was seen to perform a double loop whilst out manoeuvring a German aircraft that was on his tail. Having done this successfully he was last seen in full control of his machine but flying low and heading for the British lines. It was assumed at the time that his aircraft was suffering from engine trouble and that he was attempting to make his way back to base. Sadly, neither Cuthbert, his observer nor the aircraft were ever seen or heard of again.