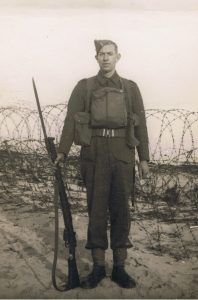 Frederick Alfred Clements was born on 5 May 1913, the son of Noah & Alice Mary Clements, one of six children. Prior to the outbreak of the Second World War he worked as a factory hand at the Samuel Wright brewery in the village. He married Rose Kathleen Marvell in 1930 and the couple lived at 3 Froghall Lane where their only daughter, Mary, was born.

The Battalion sailed from Liverpool on the 28th October 1941, it’s original destination being the Middle East. On route orders were received diverting the Regiment to the Far East. After a long, arduous, eight-week journey that had taken them via Halifax, Cape Town & Bombay the Regiment arrived in Ahmednagar on the 27th December. After three weeks of intensive acclimatisation and training the Regiment embarked on the USS West Point for Singapore where they arrived at dawn on the 29th January 1942, just two weeks before the island fortress would capitulate to the forces of the Japanese Imperial Army. On the 9th February the Japanese landed on the north-western side of the island and began what was to be the greatest defeat the British army had ever suffered. Ordered to surrender, the men in his Battalion were taken prisoner by the Japanese on 15 February 1942. They were soon to find themselves being put to work on the notorious Burma-Thailand railway and would move from camp to camp, dependant on the needs of the Japanese engineers who were overseeing the work.

Fred died from the effects of Colitis at the Kami Sonkurai No.1 camp in Thailand. Located only short distance from Three Pagodas Pass and the border with Burma, the camp was one of the most remote sites on the Burma-Thailand railway. His body was removed from the camp cemetery in December 1945 and is now buried in the Thanbyuzayat War Cemetery, Burma. (B4.W.6.)