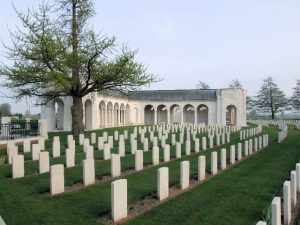 Frederick was born on the 14th March 1887, the son of William and Emma Ansell, of 41 Alleyns Road, Stevenage. On the 3rd October 1904 Fred, now 17 years-old, gave up his job as a Baker and travelled to London where he joined the Royal Navy, serving in the Royal Marine Light Infantry. He served a number of ships including HMS Attentive, HMS Sapphire and HMS Hogue. The 1911 Census records Fred as being a member of the crew of HMS Juno, moored of off the coast at Margate, Kent. He remained in the service of the Royal Marines until his discharge on the 10th December 1912.

The training provided by the Royal Marines would have made Fred a suitable candidate for the Territorial Army and he soon joined the Hertfordshire Regiment.  He was first posted to France on the 6th November 1914 and served continually on the Western Front until his death.

On the 18th May 1915, No.1 Company of the 1st Battalion, Hertfordshire Regiment, supported an attack by the Irish Guards on a farm between Festubert and Richebourg L’Avoue known as Ferme Cour d'Avoué. They had only moved about 200 yards when they were held up by very heavy machine gun and rifle fire from a location known as Adalbert Alley. The battalion had to eventually relieve the Guards because they had suffered heavy losses and it is not known at what stage Frederick lost his life. A comrade wrote and told his parents that Fred's last words were, "a piece of dirt has hit me on the head".

It was reported at the time that he was buried between Richebourg and Festubert. However, his grave was lost due to the heavy fighting in the area and he now has no known grave. His name is recorded on the Le Touret Memorial, Pas De Calais, France. (Panel 47.) 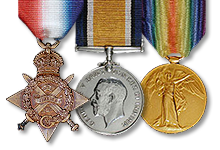