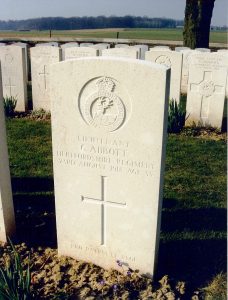 George was the son of Thomas Abbott of  "Oaklands", Hitchin Road, Stevenage. He was commissioned on the 1st July 1917. Although a Service Record does exist at the National Archives for him, it has been heavily “weeded” throughout the years and very little detail can be found concerning his service. What is known is that he was attached to the 1st Battalion, Bedfordshire Regiment, and had served with them for some time before he was killed.

On 20 August 1918 the Battalion were ordered to move to positions near the village of Buquoy, as they were to take part in the Second Battle of the Somme. Their objective was the village of Achiet Le Grand, which had been occupied by the men of the 7th Battalion, Bedfordshire Regiment, on 17th March 1917, and was used by the 45th and 49th Casualty Clearing Stations due to its position as a rail head. However, it was lost to the Germans on the 25 March 1918, and was well protected by German heavy machine guns. On the 23 August, the Battalion were involved in an assault on a railway cutting near the village and it was during this assault that George was killed.

He is buried in Gommecourt British Cemetery No.2, Hebuterne, Somme, France. (4.G.30.)