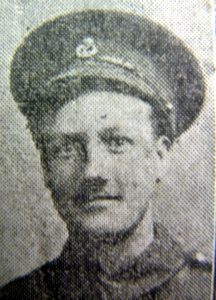 George was the son of Harry & Ann Gray of Hellards Road, Stevenage.

He initially served as Private 3265 and was posted to France on the 21st January 1915 where served continually with the Battalion and took part in the Battles of Festubert and Loos.

On the 21st March 1918 the Germans began a major offensive against the British Armies in the Somme sector, the attack fell on the British line between Arras and St.Quentin. The Hertfordshire Regiment were being held in reserve near Gurlu Wood. The Battalion moved forward to positions near Villers Faucon to support the troops of the 16th Division who were retreating under the ferocity of the enemy attack. There was much confused fighting during the retreat and many casualties were suffered.

By the 27th March the Brigades of the 39th Division had lost contact with their Headquarters, which was practically surrounded. Casualties had continued to mount and by this time there were just four officers remaining to command the troops. On the morning of the 28th March the 39th Division began to withdraw but found that German troops were in their line of retreat. The 166th Brigade, including the remnants of the 1st Hertfordshire Battalion, attacked the village of Wiencourt in an effort to force their way through. The men advanced with great determination but the assault soon fizzled out due to the sheer lack of troops and no proper supporting fire from artillery. By the evening the men of the Battalion, reported to still be in good spirits, had reached a position near the River Luce. The withdrawal continued throughout the 29th with the Battalion assembling in a wood about a mile north-west of Aubercourt. The following day the confused fighting continued resulting in further casualties, including George Gray. The men of the 1st Hertfordshire’s had withdrawn a distance of 30 miles, as the crow flies. They had marched many more than this and had been fighting almost continuously all the way.

George has no known grave and his name is recorded on the Pozieres Memorial, Somme, France.