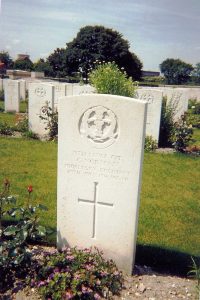 George was the son of Thomas & Nellie Norman and the husband of Elizabeth Norman.

On the 29th July 1916 the Battalion was occupying forward trenches near the town of Loos. They were very heavily bombarded by German artillery whilst in this position and George Norman was amongst those killed.

He is buried in the Philosophe British Cemetery, Mazingarbe, France. (1.F.32.)