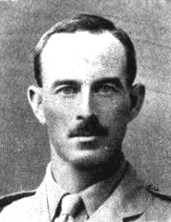 Henry Ball Holmes was born in Hong Kong on the 23rd July 1872. His father was a solicitor and his mother was a doctor and one of the first western women to practice medicine on the island.

He was educated at Bloxham School near Banbury in Oxfordshire, between 1885 and 1887 and, on leaving Bloxham, went to the Royal Military College in Oxford. He was gazetted as Second Lieutenant to the Royal Irish Fusiliers, from the militia on the 2nd June 1894 and progressed quickly through the ranks, becoming a Major by the 14th March 1904. Henry served in the South African War from 1899 to 1902, during which time he was very severely wounded on two occasions. He was awarded the Queens medal with three clasps and the Kings medal with two. He was also Mentioned In Despatches twice during his time in South Africa. Henry had married Violet Mable Ryles of The Hermitage, Stevenage on the 1st July 1914 at Totnes, Devon. The couple had one son who was still born on the 28th December 1915.

The 2nd Battalion Royal Irish Fusiliers marched from their barracks at Winchester on 19th December 1914 to the docks at Southampton where they boarded the SS City of Benares. The following day they landed at Le Harve. Major Holmes took part in numerous engagements with the Battalion until 20th April 1915 when he was shot through the face by a sniper whilst the Battalion were located at Bellewarde Farm, during the Second Battle of Ypres. He was carried to an aid station, and was eventually transferred to Luddon Camp, Buncrana, County Donegal, Ireland, where, after enduring months of pain and suffering, he died of septic blood poisoning of the brain. He was later buried at Christ Church churchyard, Lower Fahan, Buncrana, County Donegal, where a memorial was erected to him, by the regiment.

A fellow officer wrote about him " All the regiment past and present mourn with you; he was a perfect gentleman, a gallant soldier and a dear friend to all."  He was mentioned in Field Marshall Sir John French's despatch published in the London Gazette on the 1st January 1916.