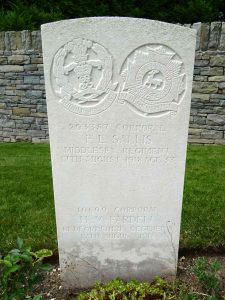 The grave of Henry Victor Fardell, shared with another soldier of the Great War.

Henry Victor Fardell was born on the 28th August 1894 in the village of Therfield. His connection with the village of Benington has not been established but it is believed that he may have worked in the area.

He arrived in France on the 30th July 1915 and served on the Western Front until he was taken prisoner at St. Quentin on the 21st March 1918, the first day of the German Spring offensive. He died from what is described as "Cardiac Weakness" whilst a Prisoner of War in Germany on the 17th August 1918. This often arose as the result of being malnourished.

Henry shares his final resting place with Private Percy Little Sallis of the 2nd Battalion, Middlesex Regiment who was died on the same day.