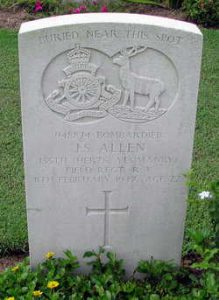 Jack was born on 18 April 1919, the son of Charles & Alice Allen of 69 Letchmore Road, Stevenage. He was a member of the Territorial Army and had worked at the Shelford and Crowe garage in Stevenage, and was later employed as an aircraft fitter at the De Havillands factory in Hatfield, Hertfordshire. At the outbreak of war the men of the Territorial forces were called to arms and Jack’s unit spent the early war years serving in various locations around the UK.

On the 9th February the Japanese landed on the northwestern side of the island and began what was to be the greatest defeat the British army had ever suffered. The Battery, with no combat experience, was called to defend the British colony and was involved in a series of bitter engagements with a tough and experienced enemy. Although no official records have survived it is believed that Jack was wounded during one of these actions and was amongst the many casualties taken to the Singapore Hospital where he later died.

He is buried in the Kranji War Cemetery although his original grave has been lost. His headstone is marked, " buried near this spot" .