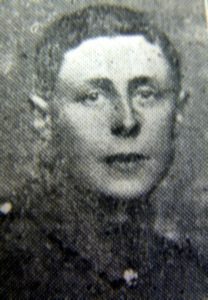 Leonard was born on the 7th November 1895 the son of James & Mary Allen of 73 Walkern Road, Stevenage. After leaving school he worked as a Hairdressers Assistant and later lived at 105 High Street with his wife Constance, whom he had married in June 1917. His younger brother, Walter Cecil Allen, served with the Royal Artillery but did not see service overseas.

Leonard first enlisted in the Army as Private 52794 of the Somerset Light Infantry and after being transferred to the 10th Welsh Regiment was to eventually lose his life on the first day of a major British offensive, The Battle of Passchendaele. The offensive was launched on the 31st July 1917 and continued until the fall of Passchendaele village on 6th November.  Although it resulted in gains for the Allies it was by no means the breakthrough General Haig intended, and such gains as were made came at great cost in human terms. A heavy preliminary artillery bombardment began which lasted for the ten days prior to the launch of the attack. The bombardment was made by 3,000 guns which expended four and a quarter million shells into the surrounding ground. Given such an onslaught the German Fourth Army fully expected the attack and the element of surprise was entirely lost. Added to this was the fact that the area was suffering the heaviest rains it had seen for 30 years and this, combined with the shelling, turned the ground into a hellish morass.

On the 31st July 1917 his Battalion advanced at 03.50am and initially lost direction in the darkness. Despite this initial setback they managed to capture two German trenches. The heavy rain had created indescribable ground conditions and the going was extremely difficult for the troops. In addition, they came under very heavy artillery shelling from the Germans whilst attempting to bring rations up to the men of the Battalion. Further supplies had to be carried forward and at least ten men of the Battalion died under the weight of their load. It is not known at what point Leonard was killed but it was almost certainly under very trying conditions. Leonard is buried in the Welsh Cemetery (Caesars Nose), Boesinghe, Belgium. (1.B.14.)

A Memorial headstone in St Nicholas church is inscribed:

“He marches away so bravely his young head proudly held. His footsteps never faltered his courage never failed. Then on the field of battle he calmly took his place.  He died for home and Britain and the honour of his race.”