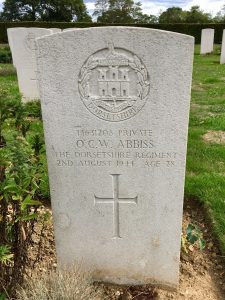 Owen was born on the 2nd December 1915, the son of Charles and Ellen Abbiss who lived at 105 Letchmore Road, Stevenage. Before the war he worked as an assembly hand at the ESA Educational Supplies factory and was the captain of the Stevenage Town football club. He had been a member of the Home Guard and joined the Army in June 1943. In September of that year he married local girl, Winifred Clarke.

Owen was killed in action during on the 2nd August 1944, during the Normandy campaign, when the 4th Battalion, Dorset Regiment, led the 130th Brigade in a breakout along the Caumont to Ondefontaine road. It’s objective was the capture of the villages of Jurques, La Bigne and Ondefontaine. At 0115 hours the Battalion moved off at a steady pace heading South-westwards. The summer days were blisteringly hot and many of the troops, mounted on tanks, kept dropping off to sleep. The Battalion was involved in many small actions during their advance and it was during one of these that Owen Abbiss was killed.

He is buried in the Hottot-Les-Bagues War Cemetery, Tilly-Sur-Seuilles, France.