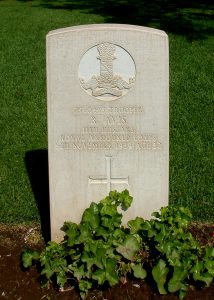 The grave of Trooper Richard Avis in the Cairo War Memorial Cemetery, Egypt.

Richard was born on the 5th November 1907, in Aldrington St Leonard, East Sussex, the son of George William & Helen Avis, and one of nine children. His father served in the Royal Field Artillery during the First World War.

A professional soldier, he enlisted in the Royal Tank Corps on the 14th February 1927 and had served his entire military career with the 11th Hussars. In 1928, the 11th Hussars became one of the first British cavalry units to mechanise. The regiment then deployed to Egypt and Palestine for much of the 1930's, manning the border with Italian Cyrenaica during the Abyssinian crisis and suppressing the Arab Revolt.

Richard died on his 32nd birthday whilst his Regiment was serving in Egypt but the circumstances are currently unknown. He is buried in the Cairo War Memorial Cemetery, Egypt. (H.7.)

Headstone Inscription: “In Loving Memory Of A Dear Husband And Father. Brief Life Is Here Our Portion”