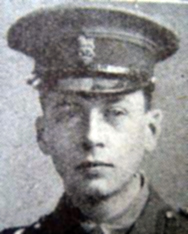 Rupert was born on the 12th May 1894 the third son of Rear Admiral Sir Thomas Hounsom Butler Fellowes KCB and Margaret Fellowes (nee Jowitt). The family lived at Woodfield Park, Stevenage. He became a student of Balliol College, Oxford and on the 19th August 1914 applied for service in an Infantry regiment. The 20 year-old, who stood at 6 feet tall, was, at that time, an undergraduate and had a passion for horse riding.

He was commissioned into the Coldstream Guards on the 19th November 1914 and was posted to France on the 20th May 1915. On the 15th September 1916 Rupert was wounded in his right thigh, and evacuated to a field hospital. On the 2nd April 1917 he was declared fit for Home Service and it was not until the 4th June that a medical board decided he was again fit for overseas service. He was then ordered to report to Victoria Barracks, Windsor, in preparation for returning to France.

At 7pm on the 20th August 1918 the Battalion left Saulty by lorry and headed toward Moyenneville. They arrived at a point along the Boiry - Moyenneville road at about 9.30pm and debussed. Tea, rum and cigarettes were issued to the troops after which they set off in Company order to their respective assembly positions. Rupert Fellowes was in command of No.4 Company, which was in place at a point known as S.27.Central in support of No.1 Company. The Battalion was in position by 3am with zero hour being set for 4.55am and was to be supported by ten tanks from the 12th Battalion of the Tank Corps.  A thick mist started to set in prior the attack and the tanks had great difficulty in finding their assembly points. At zero hour No’s 1, 2 & 4 Companies set off towards their objectives but by this time the fog was impenetrable and was worsened by a smoke barrage laid down by the artillery making it impossible to see any further than three yards in front. By 6.30am the Battalion had covered the fog bound 1000 yards and captured their objectives but described their tank support as being of little or no assistance. Up to this point they had suffered only 10 casualties but shortly afterwards the German artillery rained down on Moyenneville and the casualties began to mount up. It was during this initial action that Rupert Fellowes was killed.