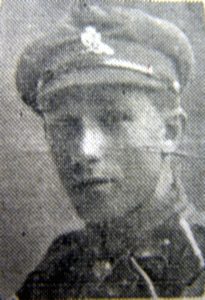 Walter was the youngest son of James & Eliza Gates of Park Farm, Aston. He had been married to Elsie Bryant for two years at the time of his death and the couple lived at 52 Alleynes Road, Stevenage. He had formerly been employed as a gardener at Shephall Bury gardens.

Walter died of pneumonia at a French hospital on 8th October 1918, possibly as a result of contracting influenza. His name is recorded on both the Stevenage and Aston War Memorials.

He is buried in the Doingt Communal Cemetery Extension, France. (3.A.25.)