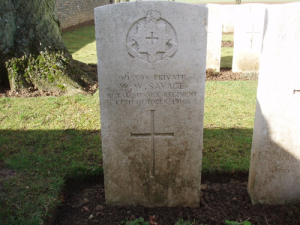 The Battalion were in an area of the Somme sector known as the Schwabern Redoubt from the 15th to the 17th October 1916, during the closing stages of the Battle of the Somme. They were involved in intense action over these two days and were attacked on several occasions with Flame-throwers and grenades as well as being shelled by artillery.  On the 17th October as the Battalion were being relieved they were heavily shelled, resuting in a number of casualties including Walter Savage

He is buried in the Gommecourt British Cemetery No.2, Hebuterne, France. (6.B.1.)