Edward was born on the 5th September 1886, the son of Arthur William & Laura Croft of the High Street, Stevenage. He entered the Royal Navy as a Boy seaman in the Signals branch in 1904. By 1906 he had become a leading seaman and later in 1908-9 took part in the suppression of the Armenian massacres and the Messina earthquake rescues. In 1911 he was promoted to Petty Officer. He was selected for duty on HMS Renown and served on her between 7th September 1905 to 31st May 1906 where he was the personal Signal of the Prince & Princess of Wales, later to become King Edward & Queen Mary. In 1913 Edward transferred to the Naval Police and later served on HMS Invincible. He served in the super dreadnought HMS Agincourt from the outbreak of war until April 1915 after which he was posted to the light cruiser HMS Caroline as acting Master at Arms.

Whilst serving with this cruiser he took part in several actions and was involved in the Battle of Jutland during which he suffered shell shock and was sent to Haslar Hospital for recovery. In January 1917 he was posted to the shore offices of the Dover Submarine Flotilla and whilst there a bomb fell, during an enemy air raid, quite close to him causing a reoccurrence of the shell shock. He returned to Haslar hospital and gradually developed Locomotor Ataxia, which is described as an inability to precisely control one's own bodily movements. People afflicted with this disease may have developed it as a result of contracting tertiary syphilis. The chilling effects of this condition and its connection to venereal disease are vividly dramatized in the story "Love O' Women" by Rudyard Kipling. The condition eventually led to Edward’s death in March 1919.

He is buried in the Royal Naval Cemetery, Eastney, Southsea. (Grave Reference: H.10.24) 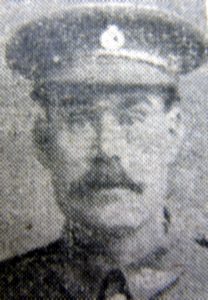 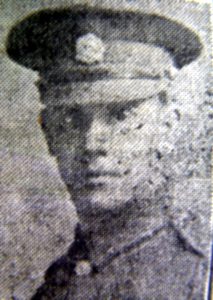 He is buried in the Faubourg D'amiens Cemetery, Arras, France. VII. E. 25. 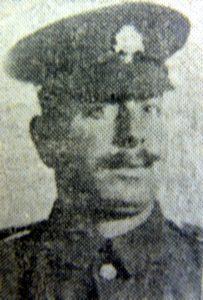 Alfred was born on the 2nd March 1881, the son of William & Rebecca Draper of Primrose Hill, Stevenage. After leaving school he worked as a Groom and a Domestic Gardner but by 1911 was employed as a Roadman for the Hertfordshire County Council. He married Annie Briars in 1908 and the couple lived at 9 Church Path, Stevenage.

Alfred arrived in France on the 30th August 1915 and served with the Battalion in many actions on the Western Front.

The German Spring offensive in March 1918 sent the British Army in the Somme region into complete disarray. The speed of the enemy advance often left units cut-off and the fighting was both confused and bitter. During the period 22nd - 27th March the Battalion had been in continuous action and it was during this time that that their commander, Lieutenant Colonel Collings-Wells received the Victoria Cross. Alfred had been in the thick of the fighting throughout the entire time with only a short period of rest.

On the 3rd April 1918, after some re-organisation, the Battalion took over the sector on the Mesnil Ridge. Here, over the next few days, they were again involved in heavy fighting with German troops who were still attempting to break through the British lines. Alfred was killed, probably as a result of shellfire, when the battalion were in the line at Forceville, South of Mesnil. His younger brother, George, had been killed in the same sector of the Somme two years earlier.

George was the son of Mrs Rebecca Draper of 35 Haycroft Road, Stevenage. He joined the 1st Battalion of the Bedfordshire Regiment and was posted to France on the 8th November 1914, and was later transferred to the 2nd Battalion of the Regiment and served continuously on the Western Front until his death during the Battle of the Somme. His older brother, Alfred, was killed two years later whilst fighting in the same sector of the Somme.

The Battalion were part of the 30th Division and on the 30th July 1916 were ordered to make an attack due East to capture the German second line of defence between Falfemont Farm and Guillemont. The task was a big one where, in one place, the 89th Brigade had to advance for a distance of over a mile of big rolling countryside. Prior to the general advance a subsidiary attack was planned on Maltzhorn Farm. At 22.00 pm on the 29th July the battalion moved up to its assembly positions South of Bernafoy and Trones Wood. The Germans shelled the battalion with Tear Gas and a new sort of Gas that caused violent stomach pains and headaches amongst the men. "A" Company attacked Maltzhorn Farm with a battalion of French troops and although they did not hold the Farm the attack was deemed a success. About 70 to 80 German troops were taken by surprise in a trench running North to South through the Farm and were, with one exception, all killed. "A" Company returned to the battalion having suffered about 30 casualties of which George Draper was one.  Another Stevenage man, Alfred Forder, was also to lose his life in the same assault later in the day.

George Draper has no known grave and his name is recorded on the Thiepval Memorial, Somme, France. (Pier/Face 2C.)