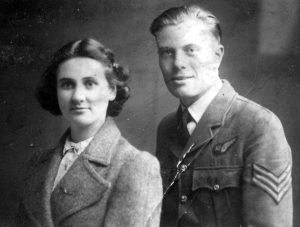 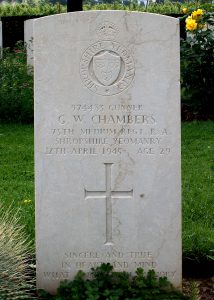 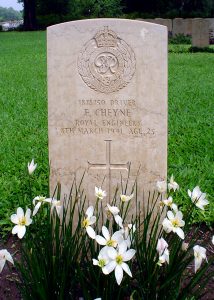 Fred lived at 3 Frogmore Lane with his wife and daughter. Before joining the Army he was employed by Wright & Co. in Walkern.
The Battalion sailed from Liverpool on the 28th October 1941, it’s original destination being the Middle East. On route orders were received diverting the Regiment to the Far East. After a long, arduous, eight-week journey that had taken them via Halifax, Cape Town & Bombay the Regiment arrived in Ahmednagar on the 27th December. After three weeks of intensive acclimatisation and training the Regiment embarked on the USS West Point for Singapore where they arrived at dawn on the 29th January 1942, just two weeks before the island fortress would capitulate to the forces of the Japanese Imperial Army.

On the 9th February the Japanese landed on the north-western side of the island and began what was to be the greatest defeat the British army had ever suffered.

Fred died whilst a Japanese Prisoner of War and is buried in the Thanbyuzayat War Cemetery, Burma. (B4.W.6.)

Ted was born into a soldiering family in 1916 the youngest son of Catherine Couldrey of Hellards Road. His father had died from his wounds whilst in action during the First World War. Ted was educated at the Stevenage Boys School and later worked at the ESA factory. He joined a local unit of the Territorial Army and later went on to serve with the Royal Artillery as a regular soldier and saw active service in both the North West Frontier of India and in the Middle East. He was preparing to join the South African Police Force when the war broke out and returned to England where he was stationed at Folkestone. Ted was one of the first to volunteer for the Commandos and, after training, was sent to Burma in 1941. In a last letter home he described how he was “going native”, an expression used to explain that he was about to embark on a jungle patrol.

He is believed to have been involved in an operation known as Mission 204. This was a top-secret mission to train Chinese guerrillas to fight the Japanese. The small team of men were located in the mountains with the Chinese guerrillas until September 1942, when the project was abandoned. The troops suffered from malaria, dysentery and typhus which may have been the cause of his death

He has No Known Grave and his name is recorded on the Rangoon Memorial, Burma. (Face 2)

Stanley was the son of Jesse & Ruth Crosse. His father was the Farm Manager to the Keysall family of Trotts Hill Farm.

Young Stanley was educated at Letchmore Road Boys School and at the age of 14, became a Porter on the LNER Line at Stevenage. He later worked for Ibcol before joining the Army.

After carrying out his initial training at 53 PTW in Bury St Edmunds he spent some time with the 8th Battalion of the Suffolk Regiment before being posted to India with Beds & Herts Regiment.

Whilst in India he contracted Typhoid Fever and died at the Dehra Dun Military Hospital.

Robert was the son of Major Frederick & Betty Drake.

On the 9th September 1943 the 6th Battalion of the Grenadier Guards tool part in the Allied landings at Salerno in Italy. One the Grenadiers had formed in the assembly area they were ordered to advance and deepen the bridgehead in the direction of Battipaglia. The Grenadiers faced the might of the German 16th Panzer Division and resistance was intense.

Through the day and night No.3 Company fought it's way forward, eventually reaching a network of lanes north of Verdesca where a hail of bullets and hand-grenades brought the advance to an abrupt halt. At dawn the company again attempted to advance and became involved with a group of German tanks and infantry in half-tracks. It was at this point, whilst at the head of his platoon, that Robert Drake was killed outright.