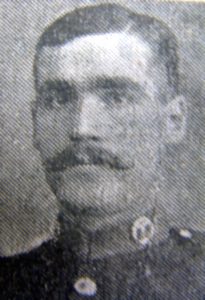 Alfred was the son of John & Julia Emery of North Road, Stevenage, and the husband of Ellen Maud Emery of The Vicarage, Thorne, Doncaster, Yorkshire. A professional solider who had been serving with the Middlesex Regiment in India, he had only just settled in Doncaster prior to his death. His brother, Frederick, had been killed on the 19th April 1915 whilst serving in France with the Bedfordshire Regiment

Alfred arrived in France on the 11th August 1914, just a week after the war broke out and served continuously on the Western Front for almost the entire period of the war. Just two weeks before the Armistice the Battalion were in positions near Montay. Here they were ordered to assault German positions located in a forest. Although the Battalion was successful in its attack, and 200 German prisoners were captured, their losses were high. Alfred is believed to have been killed by Machine Gun fire.

His name is recorded on a special memorial in the Romeries Communal Cemetery Extension, France. 129 of the burials in the cemetery are unidentified but there are special memorials to 15 casualties believed to be buried among them, one of these being Alfred Emery.