Thomas was the son of Edward & Isabella Aldridge. Prior to joining the Army he worked as a Horse Keeper on a local farm.

He was taken prisoner by the Germans and held in the Niederzwehren camp where conditions were almost intolerable. Many prisoners were only given very rudimentary treatment for any wounds they had received and it is believed that Thomas died due to inappropriate treatment of his injuries.

Thomas is buried in the Niederzwehren Cemetery, Germany. (4.B.1.) 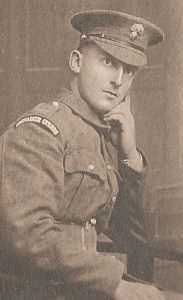 Fred was born in Holloway, London in 1883. On Monday 18 May 1914, he married Ethel Caroline Canfield at Aston parish church.

He was posted to France in July 1917 and served continuously on the Western Front.

On 21 March 1918, the Germans launched their Spring Offensive, often referred to as the Kaiserschlacht ("Kaiser's Battle"), but also known as the Ludendorff offensive. This was a series of assaults along the Western Front aimed at breaking through the Allied lines, outflanking the British forces and forcing the French to seek armistice terms. On 11 April 1918, the 31st Division, with whom Fred's battalion were serving, were called forward in ex-London buses to form a defensive line near Estaires. This was to allow retreating British and Portuguese troops to withdraw. Next day the Germans threw in all their reserves to try and capture Hazebrouck.  At dawn on the 12th April 1918 the Battalion arrived at the village of L’Epinette. Due to the fact that there were insufficient tools the companies were not well dug in and were highly vulnerable to German machine gun and light artillery fire. A devastating barrage rained down on the troops and there was heavy fighting in the area. As a result the Battalion suffered a 90% casualty rate that day, one of whom was Fred Allen.

A post war pension card shows that the couple had a child, Thomas George Kitchener, who was born on 8 January 1917. Ethel remarried on 20 March 1922 to Albert Edward Gray of Aston.

Fred Allen has no known grave and his name is recorded on the Ploegsteert Memorial, Comines-Warneton, Belgium. (Panel 1.) 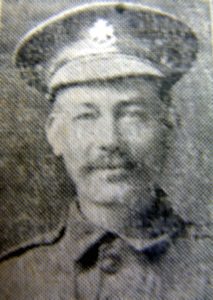 James lived at Aston End with his brother, Walter, and Sister-In-Law, Rose. Prior to the Great War he was employed by the Hertfordshire County Council as a Roadman and was responsible for the upkeep of the Aston to Broadwater route.

He joined the Army in 1915 and was posted to France in 1917 as part of a Trench Mortar Battery.  Shortly after the commencement of a German attack on the 14th October 1918 a shell fell close to an ammunition cart that was being pulled by six men, including James. He was hit and mortally wounded and died shortly after.

James has no known grave and his name is recorded on the Tyne Cot Memorial, Zonnebeke, Belgium. (Panel 99/102.) 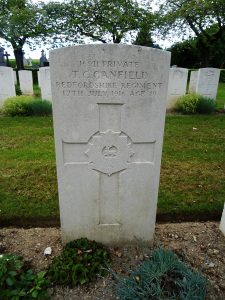 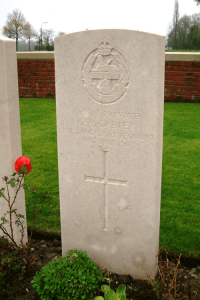 David was born in Aston. He arrived in France with his Battalion on the 16th August 1914 and served almost continuously on the Western Front.

During the morning of 4th September 1916, British artillery persistently shelled the line his Battalion were holding, and in spite of several reports, matters remained the same. Finally, two of the forward trenches had to be evacuated as the men were all being buried. In doing so, the enemy opened up with machine guns on them and there were several casualties. Quite apart from its moral effect some 30 men were killed or wounded by our own guns, one of whom was Lance Corporal David Chalkley.

He has no know grave and his name is recorded on the Thiepval Memorial, Somme, France.(Pier and Face 2 C ) 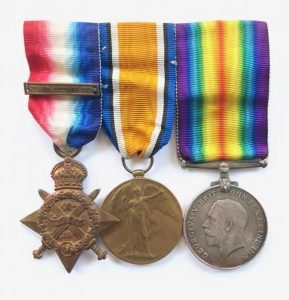 John Charlton was born in Chillingham, Northumberland in 1892. He moved with his mother, Mary Jane Charlton, and his brother, George Penrose Charlton, to St.Stephens Cottage, Aston, where their mother was a local school mistress. Before joining the Army John was employed as collector by the Pearl insurance Company although his trade was as a Journalist. He married Nellie Davidge on the 17th April 1915 and on the 21st July 1916 their son, Harold John was born. The family lived at 72 Ickelford Road, Hitchin.

John was attested for service in the Army on the 15th June 1916 and was mobilised on the 6th November of the same year. He was not a healthy man as his medical examination revealed. He was of very slight build, had poor eyesight, deformed toes on his left foot, a goitre on his upper dentures and his overall physical condition was described as poor. John was given the medical catergory BII and attached to No.4 Company, Royal Army Medical Corps based at Netley. On the 29th April 1917 John was posted to France where he served in the No.58 General Hospital at St.Omer as a Sanitary Orderly.

John died from Septic Pneumonia whilst at home on leave on the 28th February 1919 and is buried in the St.Mary Churchyard, Aston. 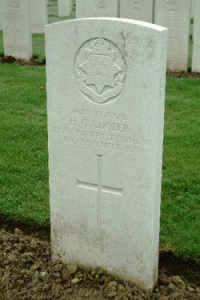