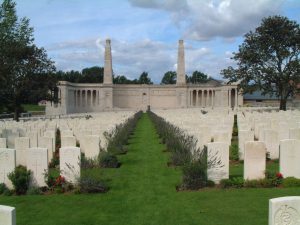 Edwin was the son of Frederick & Annie Pallett of Aston End.

On the 27th September 1918 the Battalion were in position north of the village of Havrincourt in preparation for an assault on extremely well defended German positions known as the Hindenberg Line. As the troops assembled in preparation for the attack their positions were heavily shelled by German artillery, causing some casualties. As soon as the assault commenced there was strong German resistance, with their artillery firing over open sights and the Battalion suffered heavy casualties.  Eventually, the Battalion did manage to consolidate a position near the village of Flesquiere but it had been at a heavy price.

It is not known at which point Edwin lost his life but his body was never found and he has no known grave.

His name is recorded on the Vis-En-Artois Memorial, Pas De Calais, France. (Panel 3.)