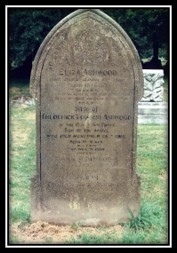 The grave of AM2 Frederick Ashwood

Frederick was the only son of Thomas & Eliza Ashwood of 2 Stanmore Road. His father was a well-known Special Constable in the town. Frederick was employed, before joining the Royal Air Force, as an under groom to Professor Newel of Madeley, Cambridge and joined the Royal Flying Corps on the 7th November 1917. Official records show that his civilian occupation was described as Poultry Rearer.

He died from the effects of Influenza at Sandridge Hospital, near St. Albans, whilst still undergoing his training. As Frederick had not served overseas he was not entitled to any of the Great War campaign medals.

His grave can be found in the St.Nicholas Churchyard, Stevenage.