Frederick was born on the 22nd September 1895, the second son of Frederick Arthur & Mary Oliver of Albert Street, Stevenage. 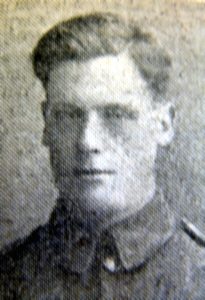 The 1911 Census shows him as an Errand Boy and a later newspaper report states that he was employed as a painter by Mrs Hall of Orchard Road. He joined the Army in March 1915 and was posted to France on the 11th October 1915.

During the Battle of the Somme he was wounded.

On the 11th February 1917 his Battalion made an assault along the Puisieux road. They faced stiff resistance and were met by heavy German machine gun and rifle fire. The battalion slowly pushed on through the night and did not achieve their objective until 3am the following morning. It was during this assault that Fredrick went missing, and was never heard of again. At the time of his death his elder brother was a POW in Germany.

Frederick has no known grave and his name is recorded on the Thiepval Memorial, Somme, France. (Pier/Face 11D.)