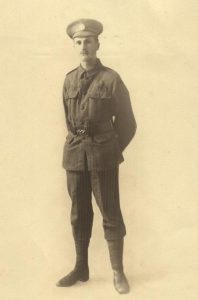 Harold Douglas Holdron was born on the 24th October 1892 in Portsmouth, Hampshire, the son of George & Priscilla Holdron (nee Snow). The family then moved to Stevenage and resided at “Raveloe”, Green Street, where Harold enrolled as a pupil at Alleynes Grammar School. Having completed his education he obtained employment as a stockbrokers clerk at the Baltic Exchange in the City of London, where he was working when war broke out in August 1914. He attempted to enlist with the H.M. Forces, but was found to be unfit for military service and was refused admission on medical grounds. Harold continued in his civilian job for the next 11 months until, on the 4th June 1915, he entered the Head Quarters of the 5th London Regiment (London Rifle Brigade), a Regiment of the Territorial Army, in Sun Street, and this time the medical inspection failed to reveal, or overlooked, the flaw that caused the refusal in August 1914.

He spent the next 6 months training with the 3rd Battalion until, on the 11th November 1915, he was posted to the Western Front with a reinforcement draft to the 1st Battalion, joining it when they were wintering in the bleak trenches of the frozen mire of the Ypres salient. It was here that he was assigned to ‘D’ Company, No.14 Platoon, and where he was to have his first experiences of the line. Harold served with the Battalion as it moved in and out of the line for the next seven months.

At 7.20am on the 1st July 1916, smoke was released from the left of the Battalion position and the attacking troops formed up in no man’s land. Then at zero hour, 7.30am, the troops moved off toward their objectives. The first two of the Battalions objectives were reached with comparatively light losses, as the enemy wire had been cut sufficiently enough by the earlier artillery bombardments to cause little trouble to the attacking troops. Harold and his wiring party went into the assault and, at around 7.40am, whilst engaged in setting out the barbed-wire entanglement within a captured German communication trench called ‘Eck’, next to a shattered trench fortification known as ‘The Maze’, a shell exploded close by and he was struck in the head by a large fragment and killed.

Harold’s body was not recovered from the field where it still lies in an unknown grave and his name is etched on to the arched gateway for the missing of the Somme at Thiepval, France.

Sadly, for George Holdron his beloved wife passed away just a few months later on the 13th November 1916.