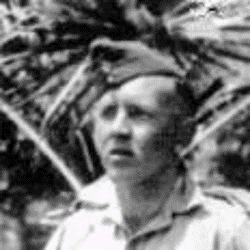 His Regiment served as part of the 35th Infantry Brigade, 56th (London) Division which fought with the 8th Army in North     Africa. Ian saw considerable service in the desert theatre and later took part in the invasion of Italy. He was wounded on 21st September 1943 during the Allied landings at Salerno.After recovering from his wounds he rejoined his unit and served almost continually on the front line.

On the 17th January 1944 Ian’s Battalion were in position near the village of Lauro and were  involved in an attempt to cross the Garigliano River. The allies were held up in Italy on the Gustav line and the 10th British Corps had the task of breaking through on the southern flank, from the mouth of the Garigliano to Cassino to pave the way for the Anzio landing. There was considerable shelling from German artillery andmany snipers were operating in the area. The Battalion had to make an assault through an orange grove and this was hampered by both the density of the trees and German heavy machine guns which were located in the area. The following day Ian was leading his platoon and had gone forward alone to rescue a wounded man. Shortly afterwards he was severely wounded and later died from the effects of his wounds.