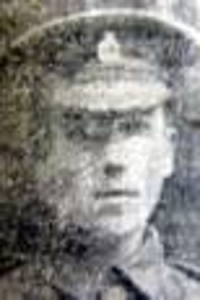 Jesse was the youngest son of George & Emma Parker of Totts Lane, Walkern. Before joining the Army he had been employed for 10 years as a Baker by C.E.Pearman in Walkern.

He enlisted in the Army in on the 10th November 1915 and initially served with the 1st Hertfordshire Regiment.He arrived in France on the 31st July 1916 and was transfered to the 3rd Entrenching Battalion of the Royal Berkshire Regiment on the 22nd August 1916. On the 5th September 1916 he was posted to the 6th Royal Berkshire Regiment and was wounded on the 3rd October 1916. He was taken to No.29 Casualty Clearing Station where was treated for a Gunshot wound to his back. He was moved to a hospital in Bolougne for further treatment and recovery and did not return to his unit until 21st November. Jesse was wounded again on the 12th March 1917, this time he received contusions to his face and neck and suffered from concussion. He was taken to the 2/1st West Riding Field Ambulance where his wounds were treated.

On the 6th July 1917, whilst undertaking physical training, Jesse sprained an ankle and fractured a fibula. He was taken to No.20 General Hospital and was sent back to Engalnd where he was admitted to the Birmingham War Hospital for recovery. After recovering from his injuries he was posted to the Ballybonare Camp in County Cork, Southern Ireland, where he remained until March 1918 when he was sent back to France, arriving at Cherbourg on the 25th March.

The Germans had commenced their Spring Offensive on the 21st March 1918 and many of the British Regiments had suffered greivous losses, with many men being taken prisoner. As a result a number of Regiments were seriously depleated and needed reinforcing and Jesse found himself transfered to the 2/6th Notts & Derbys Regiment. He arrived at the Headquarters of "C" Company on the 2nd April and two weeks later, on the 16th April, was again wounded in the face and hands. He was taken to No.13 General Hospital in Boulogne on the 19th April and was moved to No.83 General Hospital the following day. On the 23rd April he was taken to Sidcup for treatment where he developed Pneumonia to which he failed to respond to treatment and died on the 9th May.

Jesse is buried in the St.Mary Churchyard, Walkern.