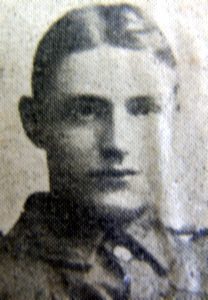 The life and death of Percy Snelgrove is filled with uncertainties but what is clear is that he was born in Stevenage on Boxing Day 1896, the son of William Francis and Florence Snelgrove. The 1911 Census shows him as a 14 year-old Blacksmith living at 10 Trinity Road, Stevenage.

Only a few pages of his Army Service Record exist but these state that he joined the Hertfordshire Regiment in Hitchin on the 2nd June 1913 with the Service Number 2214 and, at the time, was employed as a Machinist at the Educational Supply Association in Stevenage. It also states that his age on enlistment was 17 years and 5 months but this is incorrect and he was just 16 years and 6 months old.

Percy was posted to France on the 6th November 1914. Very little detail exists with regard to his award of the Military Medal, which was awarded on the 23rd February 1918, nor his eventual death. It is known that the Battalion was in the Steenbeek area of Belgium when he was killed.

He has no known grave and his name is recorded on the Tyne Cot Memorial, Zonnebeke, Belgium. (Panel 153.)