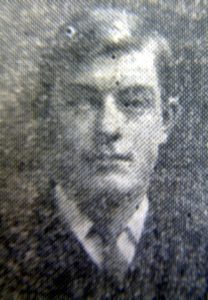 Reginald was the son of James & Martha Moss of 12 Huntingdon Road, Stevenage. Before joining the Army he was employed as a Plumbers Assistant.

The 13th November 1916 was the first day of the Battle of Ancre with the British army advancing along the River Ancre to capture the village of Beaumont Hamel. The Battalion were in the Beaucourt sector in preparation for an attack on the village which commenced at 6.45am and very heavy casualties occurred among the officers and NCO’s of the Battalion as they reached, and got into the German frontline. Overall, the Battalion suffered some 195 casualties on this day, including 82 men who were either killed or missing, one of whom was Reginald Moss. He is buried in the Ancre British Cemetery, Beaumont Hamel, Somme, France. His brother, James, died of heart failure a year earlier whilst serving with the Hertfordshire Regiment in France.

His brother, James, died of heart failure a year earlier.

He is buried in the Ancre British Cemetery, Beaumont Hamel, Somme, France. (V.B.13.)