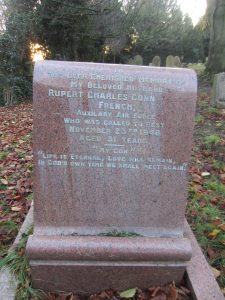 The grave of Rupert Charles Connaught French at St. Nicholas churchyard, Stevenage, but whose name is not recorded on the war memorial.

Rupert was the elder son of Rupert and Violet French who, in 1940, owned the Cromwell Hotel in Stevenage High Street.

He was serving with No.907 Balloon Squadron at Cardington and his wife, Alice, lived in nearby Biddenham. It was from his mother's Hotel that he left to return to his quarters at Bromham near Bedford on the evening of Saturday 23rd November 1940.

A Removal lorry had broken down on Hammer Hill near Cardington and a passing bus stopped to assist. The bus driver, George Plester, helped to fix a minor fault on the lorry and the two vehicles set off in opposing directions. At this point George Plester saw Rupert French come over the brow of the hill, travelling at a terrific speed, and flash past him. He then heard a crash and stopped his bus. He could see that Rupert's sports car had struck the rear of the removal van and burst into flames.

Rupert French is buried in grave 554 of the St.Nicholas churchyard, Stevenage, and, although he died whilst in the service of his country, his name is not recorded on the local War Memorial.