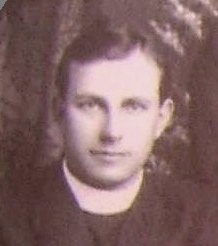 Thomas was born on the 2nd August 1884, the son of Thomas and Ellen Shovel of Upton Cross, Linkinhorne, Cornwall.  His father was Chairman of the Liskeard Union Board of Guardians and Thomas was destined to become a Wesleyan minister. He was ordained in July 1912 after which he was in charge of the English Weslyan Methodist Chapel in Holyhead from August 1914 until March 1916 when he departed for Preston, Lancashire.

He then worked in the Hitchin and Stevenage area under the Reverend John Pellow, and lived in Green Street, Stevenage. At the outbreak of war he had offered his services to the Weslyan Army & Navy Board, but was told there was no vacancy for him. Not satisfied that he was in the right sphere of labour he wrote to the Chairman of his local board and said that unless he was offered a Chaplaincy he would enlist in the Army as a Private.

He joined the Royal Army Chaplains Department on the 16th January 1918 as a Chaplain 4th Class (Captain). After a short introduction to Army life the Reverend Shovell embarked from Folkestone on the 29th January 1918 for France where he was attached to the 2nd/2nd Wessex Field Ambulance on the Western Front, for which he received the princely sum of 10 shillings a day for his work.

He died on the 5th October 1918 from shrapnel wounds received in the field whilst walking with a Medical Officer and is buried in the Louverval Military Cemetery, Doignies, France.

His name is not recorded on the Stevenage War Memorial but it is listed on the Holyhead County School Great War Memorial, the Upton Cross Methodist Chapel, which was part of the Liskeard and Looe Methodist Circuit and the Linkinhorne War Memorial.

Headstone Inscription: "With Christ Which Is Far Better"