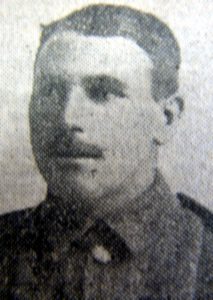 Bertram was born on the 1st April 1892, the son of George & Annie Newberry of Meadowsleade, Stevenage. He was one of seven brothers who were serving, three of whom were to lose their lives.

On the 12th July 1916 the Battalion was on the front line in the Givenchy–Clinchy sector of the Somme. An assault with Minenwerfer fire destroyed 60 yards of the British trenches followed by an attempted night raid. During this action Bert Newberry was wounded and was evacuated to a field hospital in Bethune, where he died from the effects of his injuries. He was the only casualty the Battalion suffered on that day.

Headstone Inscription: "Ever In Our Thoughts At Home"