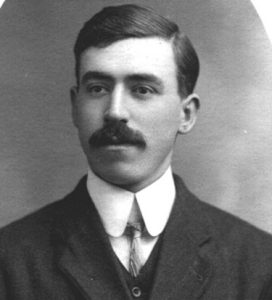 Maurice was the son of George & Annie Newberry of Meadowsleade, Stevenage and the husband of Florence Newberry of 71 North Crofts, Nantwich, Cheshire. He was one of seven brothers who were serving, three of whom were also to lose their lives. Maurice was killed during on the major British offensives, The Third Battle of Ypres, more commonly known as the Battle of  Passchendaele.

The offensive was launched on 31 July 1917 and continued until the fall of Passchendaele village on 6 November.  The Battalion were heavily involved in the offensive and although it resulted in gains for the Allies it was by no means the breakthrough General Haig intended and such gains as were made came at great cost in human terms. Maurice was with the Battalion when it attacked St. Juliaan on the 31st July. The village lays on the Hanebeek, one of the small streams that drains the fields in this area. On the 18th July 1917 a heavy preliminary artillery bombardment began which lasted for the ten days prior to the launch of the attack. The bombardment was made by 3,000 guns which expended four and a quarter million shells into the surrounding ground.  Given such an onslaught the German Fourth Army fully expected the attack and the element of surprise was entirely lost. Added to this was the fact that the area was suffering the heaviest rains it had seen for 30 years and this, combined with the shelling, turned the ground into a hellish morass.

The Battalion were in support of an attack on the Langemarck Line and at 03.45am the planned assault began. There were three objectives to achieve known as Blue, Black & Green and units of the 116th Brigade easily captured the first two objectives, preparing the way for the forward companies of the Hertfordshire battalion, to take the third objective.

At 05.00am they left their assembly positions to attack their objective, which lay over the crest of a ridge. As they made their way forward they came under heavy fire from both German machine guns and snipers but after eliminating a German strongpoint moved up towards St.Julian, which was only lightly held. The battalion crossed the Steenbeek with some difficulty and two of its supporting Tanks became bogged down in the mud. Things then went from bad to worse. A pre-arranged artillery barrage never materialised due to the guns being unable to move forward over the muddy terrain and the German barbed wire defences, which were fifteen feet deep in some places, were found to still be intact.

It was soon realised that ground could only be won by section " rushes" supported by the unit’s own fire. The Cheshire Regiment were on the right of the battalion but the Black Watch, who were due to cover the left flank, had been seriously delayed. This left the Hertfordshire's seriously exposed and the Germans exploited this by bringing a hurricane of fire down upon the stricken troops. This was followed by a German counter-attack and by 10.30 am it was clear that the objective could not be achieved. Casualties were very heavy with 459 men being killed, missing or wounded.

The Battalion remained in the area throughout the offensive and returned from it’s billets to the trenches at Mount Sorrel on the 20th September 1917.  On the night of the 25th September they were ordered to attack German positions at Bassevillebeek. The assault began at 05.50am the following morning but very little ground was gained.  The Battalion suffered six casualties as a result of this attack, one of whom was Maurice Newberry. The others  were as follows;

Maurice is buried in the Hooge Crater Cemetery, Zillebeke, Belgium. (19.B.8.)