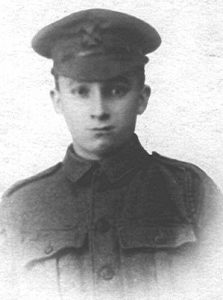 Reginald was the son of George & Annie Newberry of Meadowsleade, Stevenage. Although he was originally posted to the Kings Royal Rifle Corps he was, at the time of his death, serving with the 6th (City of London) Battalion, London Regiment. He was one of seven brothers who were serving, of which two others Maurice and Bertram also lost their lives.

On the 9th August 1918 the Battalion were at La Houssoye in the Somme sector. They were ordered to take Chipilly Ridge, which involved the capture of a small track running along near the crest of the ridge. Three Tanks were to be employed in support of the assault and at 4.15pm the Battalion moved off from it’s positions to commence the attack. As they rounded the edge of Celestines Wood they came under very heavy machine gun fire from both the South-western corner of the wood and the crest of Chipilly Ridge. Very heavy casualties were sustained and it was only the use of both the Tanks and heavy machine guns that helped to prevent the attack from becoming a complete disaster. However, the Battalion suffered heavily with 12 Officers and 308 Other Ranks either killed, wounded or missing. Reginald Newberry was amongst those who lost their lives on this day.

Reginald is buried in the Heath Cemetery, Harbonnieres, France. (6.J.1.)

Headstone Inscription: "Ever In Our Thoughts At Home"