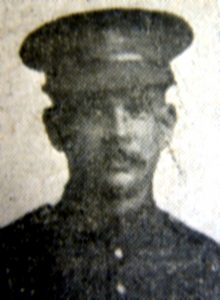 George was born on the 22nd June 1877, the only son of George Marshall of 53 Albert Street, Stevenage. After emigrating to Canada he lived with his wife and four children in River Road, Hespeler, Ontario. He joined the Canadian army in April 1915.

On the 18th September 1916 the Battalion moved in a bivouacked area known as The Chalkpit, East of Albert. The weather was foul and the wet & muddy conditions were described in the unit war diary as “trying”.  On the 22nd September the Battalion moved into the front line trenches. Here they spent all their time under continuous shell fire from the German artillery. It was not until the 26th September that the Battalion attacked the German positions and their assault was described as successful. Some of the supporting companies had moved up during the night of 26th/27th, and this is probably where George Marshall was killed. The five day tour of the front line trenches had cost the Battalion 5 Officers and 213 Other Ranks as casualties.

Headston Inscription: "Until The Day Break And The Shadows Flee Away"