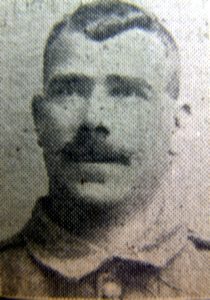 Henry was born on the 27th January 1887, the only son of Mr Henry Charles Forder of North Road, Stevenage. On the 12th November 1904, at the age of 18 years and 10 months, Henry, then employed as a Labourer, joined the Bedfordshire Regiment at Hitchin.  He served with the Battalion in India, Aden and Bermuda before returning to the UK for Home Service.

He was posted to France on the 16th August 1914 where the Battalion moved by train to Le Cateau. They then marched a further 5 miles to billets in Pommereuill. He suffered a sprain to his right foot on the 6th September 1914 and was returned to the UK, where remained in hospital until the 8th November when he was posted back to France, joining the 2nd Battalion at Bailleul on the 12th November 1914. He then served with the Battalion throughout the winter of 1914/15 eventually being promoted to Sergeant by the 25th September 1915. He was admitted to No.97 Field Ambulance on the 28th March 1916, suffering from Laryngitis and was sent to the 30th Division Rest Station, where he remained until 2nd April when he was posted back to his unit.

On the 11th July 1916, Henry was wounded at Trones Wood during the Battle of the Somme but remained at duty. However, on the 15th August 1916 he was Reduced To The Ranks as a result of Inefficiency. There currently appears to be no explanation for this event. On the 25th February 1917 Henry was admitted to No.96 Field Ambulance suffering with Dyspepsia and was sent to 30th Division Rest Station but his condition grew worse and he was then sent to No.22 General Hospital at Camiers on the 10th March 1917. On the 15th March Henry boarded the Hospital Ship Gloucester Castle and returned to the UK. He was admitted to the Welsh Metropolitan War Hospital and on the 28th March 1917 was subject of a medical board, where it was determined that he was suffering from Pulmonary Tuberculosis and that he was no longer fit for war service.

Henry was discharged from the Army on the 18th April 1917. He was awarded the Silver War Badge, numbered 128669, and returned to civilian life. Henry Forder died in Ware Hospital on the 21st January 1918 from Pulmonary Tuberculosis, which, a local newspaper report claimed, was as a result of the effects of being gassed and exposure. It also claimed that Henry was awarded the Distinguished Conduct Medal in January 1918 but official records do not substantiate this claim.

Henry is buried in the St.Nicholas Churchyard, Stevenage.