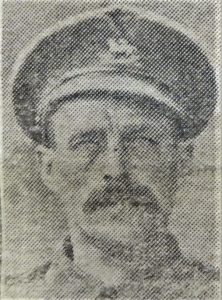 John was the son of Thomas & Mary Furr of Fishers Green, Stevenage. He lived at 1 Springfield Passage, Stevenage, with his wife Phyllis and their daughters, Phyllis & Violet. Before the war had been employed at the Worbeys timber yard in Trinity Place, Stevenage. He was one of five brothers who were serving in the Army all of whom had been either wounded or gassed, some both.

The Medal Index Card for John shows that he served with both the Labour Corps and the Manchester Regiment. He died from a serious gunshot wound to his thigh and is buried in the Mont Huon Military Cemetery, Le Treport, France. (5.H.2B.)