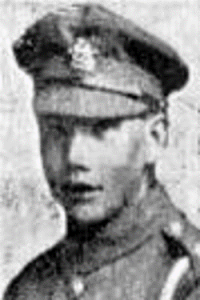 Stanley was the son of James Alfred & Clara Knight. Before joining the Army he was employed by D.Foster in Walkern. He enlisted in the Hertfordshire Regiment on the 1st November 1915. After arriving in France as a Machine Gunner he was transferred to the Royal Berkshire Regiment. He was wounded on the 20th May 1916 and did not return to France until June 1917.

On the 2nd December 1917 the Battalion were in position North of Passchendaele. They were ordered to take part in an assault on enemy positions and whilst preparing for the attack their positions were shelled by German artillery, causing some casualties. The attack commenced at 1.55am and the night sky was lit up with gold and green illumination flares. The Germans responded with considerable artillery fire causing numerous further casualties. In total the Battalion lost 88 men killed or missing on this night, one of whom was Stanley Knight.

He has no known grave and his name is recorded on the Tyne Cot Memorial, Zonnebeke, Belgium. (Panel 105/106.)