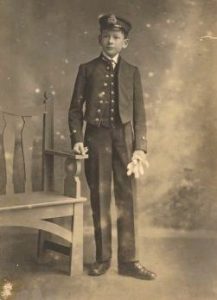 Ivan Fellowes was born on the 16th January 1898, the youngest son of Rear Admiral Sir Thomas Fellowes KCB and Margaret Fellowes. The family lived at Woodfield Park, Stevenage. He entered the service with the Royal Navy in January 1911, aged 13, and joined the crew of HMS Irresistable at the outbreak of war in August 1914.

On 19th February, 1915, Admiral Carden began his attack on the Dardanelles forts. The assault started with a long range bombardment followed by heavy fire at closer range. As a result of the bombardment the outer forts were abandoned by the Turks. The minesweepers were brought forward and managed to penetrate six miles inside the straits and clear the area of mines. Further advance up into the straits was now impossible. The Turkish forts were too far away to be silenced by the Allied ships. The minesweepers were sent forward to clear the next section but they were forced to retreat when they came under heavy fire from the Turkish batteries.

On the night of 8th March the undetected Turkish minelayer, Ausret, laid many mines in the area of the Dardanelle’s Narrows. On 18th March eighteen Allied battleships entered the straits. The fleet included Queen Elizabeth, Lord Nelson, Agamemmon, Inflexible, Ocean, Irresistible, Prince George and Majestic from Britain and the Gaulois, Bouvet and Suffren from France. At first they made good progress until the Bouvet struck a mine, heeled over, capsized and disappeared in a cloud of smoke. Soon afterwards two more ships, Irresistible and Ocean also hit mines. Most of the men in these two ships were rescued but by the time the Allied fleet retreated, over 700 men had been killed.

His elder brother, Rupert was killed in action on the Western Front on the 21st August 1918 whilst serving with the Coldstream Guards.